The Minimum Wage Should Be a Living Wage, Not a Starvation Wage

The federal minimum wage of $7.25 is worth $2 less today than it was in 1968 when adjusted for inflation. That’s one of the findings in a study by the non-partisan Economic Policy Institute.

Today, the minimum wage, which hasn’t increased since 2009, falls short of a living wage. According to the EPI study, a full-time worker would need to earn $11.06 an hour in to keep a family of four out of poverty.

President Barack Obama proposed raising the federal minimum wage to $9 an hour. However, Republican lawmakers unanimously voted down a Congressional proposal to raise the minimum wage. 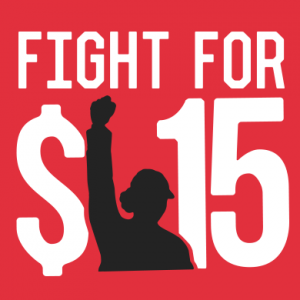 1. Myth: Raising the minimum wage will only benefit teens.

Not true: The typical minimum wage worker is not a high school student earning weekend pocket money. In fact, 89 percent of those who would benefit from a federal minimum wage increase to $12 per hour are age 20 or older, and 56 percent are women.

2. Myth: Increasing the minimum wage will cause people to lose their jobs.

Not true: In a letter to President Obama and congressional leaders urging a minimum wage increase, more than 600 economists, including 7 Nobel Prize winners wrote, “In recent years there have been important developments in the academic literature on the effect of increases in the minimum wage on employment, with the weight of evidence now showing that increases in the minimum wage have had little or no negative effect on the employment of minimum-wage workers, even during times of weakness in the labor market. Research suggests that a minimum-wage increase could have a small stimulative effect on the economy as low-wage workers spend their additional earnings, raising demand and job growth, and providing some help on the jobs front.”

Not true: A July 2015 survey found that 3 out of 5 small business owners with employees support a gradual increase in the minimum wage to $12. The survey reports that small business owners say an increase “would immediately put more money in the pocket of low-wage workers who will then spend the money on things like housing, food, and gas. This boost in demand for goods and services will help stimulate the economy and help create opportunities.”

4. Myth: Raising the federal tipped minimum wage ($2.13 per hour since 1991) would hurt restaurants.

Not true: In California, employers are required to pay servers the full minimum wage of $9 per hour — before tips. Even with a 2014 increase in the minimum wage, the National Restaurant Association projects California restaurant sales will outpace all but only a handful of states in 2015.

5. Myth: Raising the federal tipped minimum wage ($2.13 per hour since 1991) would lead to restaurant job losses.

Not true: As of May 2015, employers in San Francisco must pay tipped workers the full minimum wage of $12.25 per hour — before tips. Yet, the San Francisco leisure and hospitality industry, which includes full-service restaurants, has experienced positive job growth this year, including following the most recent minimum wage increase.

6. Myth: Increasing the minimum wage is bad for businesses.

Not true: Academic research has shown that higher wages sharply reduce employee turnover which can reduce employment and training costs.

7. Myth: Increasing the minimum wage is bad for the economy.