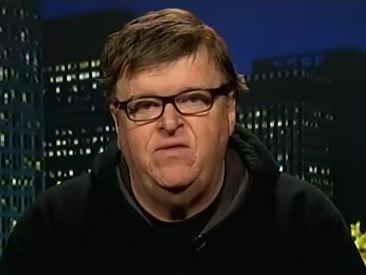 “Contrary to what those in power would like you to believe so that you’ll give up your pension, cut your wages, and settle for the life your great-grandparents had, America is not broke. Not by a long shot. The country is awash in wealth and cash. It’s just that it’s not in your hands. It has been transferred, in the greatest heist in history, from the workers and consumers to the banks and the portfolios of the uber-rich. Today just 400 Americans have the same wealth as half of all Americans combined. Let me say that again. 400 obscenely rich people, most of whom benefited in some way from the multi-trillion dollar taxpayer “bailout” of 2008, now have as much loot, stock and property as the assets of 155 million Americans combined.”
—Michael Moore