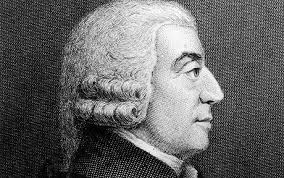 “No society can surely be flourishing and happy, of which the greater part of the members are poor and miserable. It is but equity, besides, that they who feed, clothe and lodge the whole body of the people, should have such a share of the produce of their own labor as to be themselves tolerably well fed, clothed and lodged.” (The Wealth of Nations, Book I, Chapter VIII, p.94)

“Our merchants and master-manufacturers complain much of the bad effects of high wages in raising the price, and thereby lessening the sale of their goods both at home and abroad. They say nothing concerning the bad effects of high profits. They are silent with regard to the pernicious effects of their own gains. They complain only of those of other people.” (The Wealth of Nations, Book I, Chapter IX, p.117)

“People of the same trade seldom meet together, even for merriment and diversion, but the conversation ends in a conspiracy against the public, or in some contrivance to raise prices. It is impossible indeed to prevent such meetings, by any law which either could be executed, or would be consistent with liberty or justice. But though the law cannot hinder people of the same trade from sometimes assembling together, it ought to do nothing to facilitate such assemblies; much less to render them necessary.” (The Wealth of Nations, Book I, Chapter X, Part II, p.152)

“This disposition to admire, and almost to worship, the rich and the powerful, and to despise, or, at least, to neglect persons of poor and mean condition is the great and most universal cause of the corruption of our moral sentiments.” (The Theory of Moral Sentiments, Part I, Section III, Chapter III)

“Though the principles of the banking trade may appear somewhat abstruse, the practice is capable of being reduced to strict rules. To depart upon any occasion from these rules, in consequence of some flattering speculation of extraordinary gain, is almost always extremely dangerous, and frequently fatal to the banking company which attempts it.” (The Wealth of Nations, Book V, Chapter I, Part III, p.820)