“I’d heard my parents [Ron and Nancy] read their horoscopes aloud at the breakfast table, but that seemed pretty innocuous to me. Occasionally, I read mine, too — usually so I can do the exact opposite of what it says. But my parents have done what the stars suggested — altered schedules, changed travel plans, stayed home, cancelled appearances.”
—Patti Davis (formerly Patricia Ann Reagan), The Way I See It 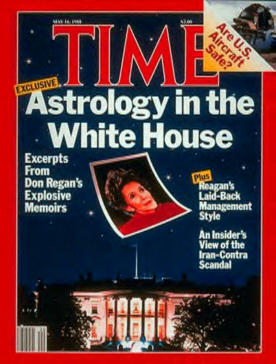 “Emerging from a particularly credulous Southern California culture, Nancy and Ronald Reagan relied on an astrologer in private and public matters — unknown to the voting public. Some portion of the decision-making that influences the future of our civilization is plainly in the hands of charlatans.”
—Carl Sagan, The Demon-Haunted World

“Mrs. Reagan’s dependence on the occult went back at least as far as her husband’s governorship, when she had depended on the advice of the famous Jeane Dixon. Subsequently she had lost confidence in Dixon’s powers. But the First Lady seemed to have absolute faith in the clairvoyant talents of a woman in San Francisco.”
—Donald Regan (Reagan’s Chief of Staff), For the Record: From Wall Street to Washington

“Virtually every major move and decision the Reagans made during my time as White House Chief of Staff was cleared in advance with a woman in San Francisco who drew up horoscopes to make certain that the planets were in a favorable alignment for the enterprise.”
—Donald Regan (Reagan’s Chief of Staff), For the Record: From Wall Street to Washington

It wasn’t widely acknowledged until the publication of Chief of Staff Donald Regan’s memoir, For the Record in 1988, that President Reagan and his influential wife sought the advice of an astrologer. Time magazine would later identify Ron and Nancy’s chart reader as San Francisco astrologist Joan Quigley.

Quigley was not the first astrologer the Reagans had consulted. Ronald and Nancy Reagan had a long history of involvement with astrologers and psychics. During the 1950’s and 1960’s, Ron and Nancy enlisted the services of Hollywood astrologer Carroll Righter, and later Jeane Dixon. In his 1965 autobiography, Where’s the Rest of Me?, Reagan said that he and Righter were “good friends” and that “every morning Nancy and I turn to see what he has to say about people of our respective birth signs.” It was on Righter’s advice that Reagan arranged his swearing-in as governor at the odd time of 9 minutes past midnight. 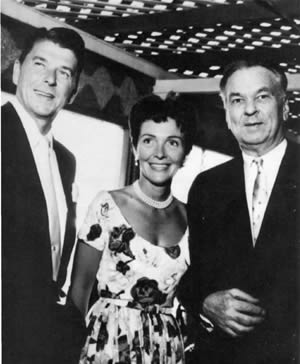 For fundamentalist preachers like Pat Robertson and Jerry Falwell — who proclaimed Reagan a standard-bearer of Christian righteousness — the astrology matter should have been of particular concern. Astrology is a branch of the occult and is inimical to Christianity. However, if the fundamentalist leaders were concerned or embarrassed by the astrology revelations, they didn’t show it. They also ignored the fact that Reagan rarely attended church.

For the record: Joan Quigley became Nancy Reagan’s astrologer after the two met on “The Merv Griffin Show” in 1973. Quigley reportedly provided astrological advice during Ronald Reagan’s bid for the Republican nomination in 1976. After reaching the White House, the Reagans sought Quigley’s horoscope readings even more. Nancy had special private phone lines installed in the White House, and at Camp David, expressly for talking to Quigley.

Shortly after President Reagan was shot by John Hinckley, entertainer Merv Griffin informed Nancy that he had spoken to Quigley. Quigley told Griffin that if Nancy had only called her on the day of the assassination attempt, she could have warned Nancy that the President’s charts foretold a bad day.

Chief of Staff Donald Regan elaborated on what it was like having to make adjustments to the President’s schedule based on the zodiac:

“Mrs. Reagan passed along her prognostications to me after conferring with [Quigley] on the telephone — she had become such a factor in my work, and in the highest affairs of the nation, that at one point I kept a color-coded calendar on my desk (numerals highlighted in green ink for “good” days, red for “bad” days, yellow for “iffy” days) as an aid to remembering when it was propitious to move the President of the United States from one place to another, or schedule him to speak in public, or commence negotiations with a foreign power.”
—Donald Regan, For the Record: From Wall Street to Washington

“According to a list provided by Mrs. Reagan to [scheduling aide] Bill Henkel, [Quigley] had made the following prohibitions based on her reading of the President’s horoscope:

Obviously this list of dangerous or forbidden dates left very little latitude for scheduling.”
—Donald Regan, For the Record: From Wall Street to Washington

“The frustration of dealing with a situation in which the schedule of the President of the United States was determined by occult prognostications was very great — far greater than any other I had known in nearly forty-five years of working life.”
—Donald Regan, For the Record: From Wall Street to Washington

“Intelligence officials say the CIA went nuts when it learned the First Lady was discussing US-Soviet relations with an outsider [Joan Quigley] on non-secure lines. Some White House officials were also horrified that presidential security was being breached. And, according to former White House officials and Quigley, the astrologer was involved in everything. She picked the departure time for the Reykjavik Summit, the optimum time for signing an arms control treaty, the best time for the trip to Moscow. And, when Mrs. Reagan was upset about a controversial trip to Germany in 1985, Quigley plotted every takeoff and landing. Her scheduling for that visit to the Bitburg cemetery was so complicated that former White House aide Michael Deaver sought permission from Mrs. Reagan to talk to the astrologer directly. The President knew what was going on. Deaver told NBC News that if Mrs. Reagan wanted a schedule change, she would say, ‘I told Ronnie and that’s what Joan recommends…’ Former aides say Ronald Reagan was a man who read his horoscope and the ‘funnies’ before the rest of the paper. They say he wasn’t only indulging his wife — that the former president also believed in astrology.”
—NBC News, reported by Andrea Mitchell, 1989 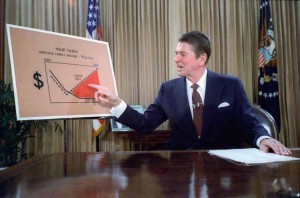 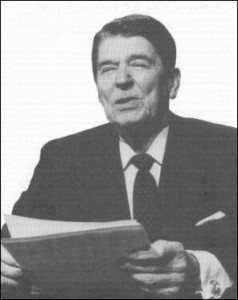