What ExxonMobil and Other Climate Change Deniers Learned from Big Tobacco 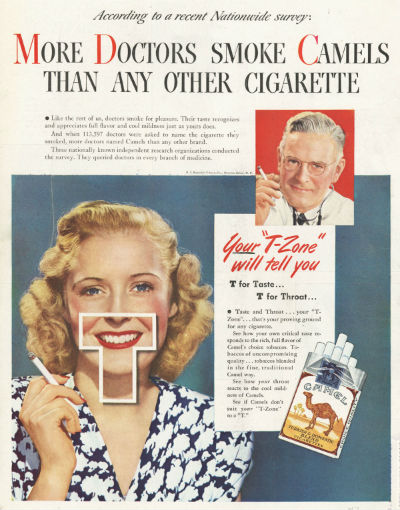 “A loose-knit group of high-level scientists and scientific advisers, with deep connections in politics and industry, [have run] effective campaigns to mislead the public and deny well-established scientific knowledge over four decades. The same individuals who claim the science of global warming is ‘not settled’ have also denied the truth about studies linking smoking to lung cancer, coal smoke to acid rain, and CFCs to the ozone hole. ‘Doubt is our product,’ wrote one tobacco executive. These ‘experts’ supplied it.”
—Naomi Oreskes

“More than 40 percent of the $1.6 million ExxonMobil spent last year on 283 congressional races went to 102 documented climate science deniers. It gave $544,000 to 89 deniers in the House, including Fred Upton (R-Mich.), chairman of the Energy and Commerce Committee, and Lamar Smith (R-Texas), chairman of the Science, Space and Technology Committee. Thirty-four of the 54 members of the Energy and Commerce Committee got ExxonMobil money, and half of those recipients are climate change deniers. Sixteen of the 39 members of the Science Committee, meanwhile, got ExxonMobil funding, and four of the recipients are deniers.”
—Elliott Negin, Union of Concerned Scientists

“In his opening statement at [ExxonMobil’s annual shareholders] meeting, CEO Rex Tillerson predicted that oil and natural gas ‘will meet about 60 percent of global energy in the year 2040.’ And when asked later why he uttered nary a word about renewable energy in his remarks, Tillerson quipped, ‘We choose not to lose money on purpose’ to loud applause.”
—Elliott Negin, Union of Concerned Scientists